There are many fun events coming up at the Saratoga County History Center! 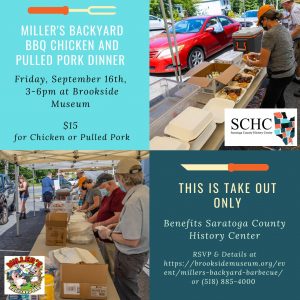 “Fundraising is important to support our mission to preserve and share the diverse histories of Saratoga County,” explains Trustee Donna Dardaris.  “We are excited to work for the first time with Saratoga County-based Miller’s Backyard BBQ, who are Eight Time Grand Champions on the pro circuit.”

Dinners are $15 each.  Chicken dinners will include 1/2 chicken, baked potato, coleslaw, and cornbread.  Pulled Pork dinners will include 1/2 lb Pulled Pork with baked potato, cornbread, and 4 oz coleslaw.  In addition, cheesy and delicious Mac and Cheese sides are available for $5.  This is take-out only.  Please visit https://brooksidemuseum.org/event/millers-backyard-barbecue/ or call (518) 885-4000 to reserve your meal.  There will be a limited number of extra dinners available on the day. Questions? Contact donna@brooksidemuseum.org or phone 518-885-4000. 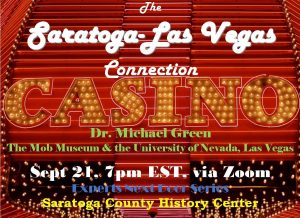 Mob Museum Trustee and University of Nevada, Las Vegas Associate Professor of History Michael Green will go over some of the famous and not-so-famous links between the two resort towns, after which he will take questions and comments from the audience. A native of Las Vegas, Dr. Green is a nationally-recognized scholar of US history and an experienced, engaging public speaker who delights audiences with anecdotes and inside scoops. From movies to mobsters to migrants, Dr. Green will pull back the curtain (or should we say prison bars?) on the Saratoga-Las Vegas relationship. The event, to be held on Zoom, is open to the public. It is free, but donations are greatly appreciated. To register, please click here

ABOUT THE SCHC’s BROOKSIDE MUSEUM

SCHC’s Brookside Museum is open Thursday to Sunday from 1pm to 5pm.  The museum is located at 21 Fairground Avenue in Ballston Spa, NY 12020.  Museum entry is free and donations are accepted.  The Saratoga County History Center is proud to be a Blue Star Museum.