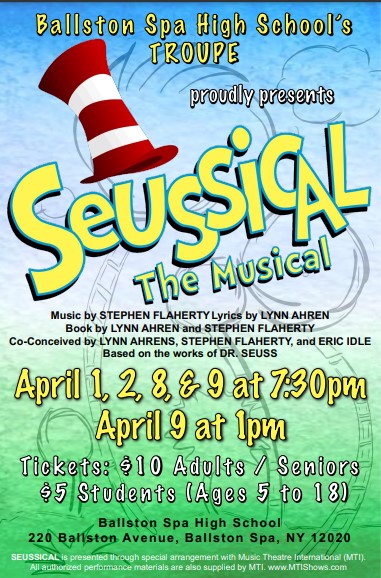 Ballston Spa High School’s Troupe is proud to present Seussical the Musical, featuring over 90 high school students, whether on the stage, backstage, or in the orchestra pit; these students will bring the audience to its feet. This musical journey brings together all of Dr. Seuss’ beloved characters. Performances are April 1, 2, 8, and 9 at 7:30pm and April 9 at 1:00 pm. Performances are held at Ballston Spa High School, 220 Ballston Avenue, Ballston Spa, NY 12020. Tickets cost $10 for adults/ senior citizens, $5 for students (ages 5-18). Tickets are sold at the door.

In Seussical the Musical, the beloved Dr. Seuss books have been turned into a musical extravaganza from Tony winners Lynn Ahrens and Stephen Flaherty and features Seuss characters including, The Cat in the Hat- Peter Hinckley, Horton the Elephant- Benjamin Ferrara, Gertrude McFuzz – Maddie Burns, Mayzie LaBird- Fiona Hughes, Jojo – Mia Parks, Sour Kangaroo – Taylyn Markham, General Schmitz – Orion Rust, Mr. Who Mayor – Michael Flynn, Mrs. Who Mayor- Rachel Camilli, Thing 1- Katie Benanto, Thing 2- Zuzu Evans and all of the Whos of Whoville! The imagination runs amidst different musical styles, ranging from Swing to Gospel, Latin to Pop, and R&B to Funk. For anyone who grew up reading Dr. Seuss’ books, this musical adaptation of the classic stories will be fun for the whole family!

This musical transports audiences from the Jungle of Nool to the Circus McGurkus. Meanwhile, the Cat in the Hat tells the story of Horton the Elephant, who discovers a clover with a speck of dust containing a tiny world with people called the Whos. Horton takes on the responsibility to protect the Whos from a world of naysayers and dangers. Horton must also guard an abandoned egg that has been left in his care by the irresponsible Mayzie LaBird. Although Horton faces ridicule and danger, the intrepid Gertrude McFuzz never loses faith in him. Thus, the powers of friendship, loyalty, family, and community are challenged and emerge triumphantly!